Blizzcon World of Warcraft And More 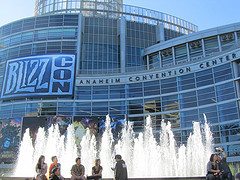 Recently my wife and I traveled to beautiful Anaheim California to cover the 2013 Blizzcon Convention.  The convention sold out online in moments and drew fans of Blizzard Entertainment from around the world for a weekend of news, panels, previews, music, Cosplay, and more.  Those who were not able to get into the convention were able to follow along via DirecTV or through online streaming which could be purchased from the company.

After checking in we made our way to the press entrance to gain seats for the opening ceremony which had those in attendance as well as the countless others watching remotely counting down the moments before the show began.  The highlights for the opening ceremonies has always been a look at what the company has in store and since they did not hold a convention last year, speculation has run rampant as to what the company may divulge.

Their latest card-based adventure Hearthstone, gained a huge ovation especially when they revealed a new character card and informed the assembled masses that it would be available for both the Droid and Iphone formats in the coming year.  As keyed is the audience was for this announcement, the footage of Heroes of the Storm brought a thunderous ovation from all in attendance.  What started out as a single map that was shown to us in 2011 has grown into its own standalone game.  The game combines characters from Warcraft, Diablo, and Starcraft and task players with various combat and tactical assignments.  The gameplay is a mixture of the real-time strategy elements of Starcraft and Warcraft and has elements of Diablo’s gameplay.

The gameplay footage we saw was nothing short of spectacular and the animation of Raynor from Starcraft throwing down on Diablo brought several cheers of delight from the assembled crowd. The opening ceremonies also discussed the competitive aspect of bliss gone as professional gamers from the world over competed for hundreds of thousands of dollars in prizes.  It was also announced that Blink 182 would be providing the entertainment that weekend.

While those announcements certainly got their share of attention what everybody was waiting for was to hear what the future held for World of Warcraft.  After a very entertaining set up, it was revealed that the next expansion would harken back to the time when the Alliance was formed in order to fight on ultimate evil.  The Horde faction we were told would be given a shot at redemption when this new threat arises in Warlords of Draenor which is the next expansion for the phenomenally popular and award-winning series.  One announcement that delighted the crowd once the repeal of the level cap being raised to 100 as well as new continents, challenge modes, and so much more.

Editors note: Although Accent Inns offers great free wifi so that you can enjoy wonderful online games and more…. we do frown on Warlords throwing down on anyone while staying with us. Just sayin’