Let's think of our pets as winter approaches

With the weather changing it’s time for all of us to not only put on our winter coats but let’s make sure to remember our pets. They to need to be protected against the elements. The story below talks a little about what we don’t want to see and what the dedicated people at the BCSPCA are forced to deal with.

The BC SPCA is the only animal welfare organization in B.C. with the authority to enforce laws relating to animal cruelty and they responded to nearly 6,000 complaints of animal cruelty and abuse last year.  Their investigations resulted in the rescue of 3,443 injured animals and the removal of 1,332 more animals from dangerous or neglectful situations.  April was one of these animals.

You may heard April’s story.  In a supposed attempt to exercise her, April’s guardian tied the golden Lab cross to the back bumper of his truck, before dragging her down a dirt road for nearly 3 k.m. April sustained a number of painful injuries including deep lacerations and bruises over her body, face and paws. BC SPCA Special Provincial Constables immediately investigated April’s case and charges were laid against her former owner under both B.C.’s Prevention of Cruelty to Animals Act and the federal Criminal Code.  That individual is currently awaiting trial.

Without the work of the BC SPCA there is little chance that anyone would be held accountable for what April has endured. 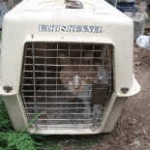 Is this how you would like to spend your life?

Accent Inns in Burnaby hotel recently showed their support and commitment to the BC SPCA by hosting several BC SPCA Animal Cruelty Investigators from out of town so they could attend an important training session.