I’m a huge fan of April Fool’s hoaxes as long as they are not cruel, dangerous or end up taking the time of any emergency services. The best hoaxes are those that have a grain of truth, or one could imagine being true.

Last April 1st this announcement appeared on the Accent Inns website: Accent Inns is once again at the forefront of innovation in the highly-competitive world of hospitality, with the addition of one more offering to their already-specialized services: equi-accommodation, aka the provision of rooms for people and horses, together.

Mandy Farmer, CEO of Accent Inns last year on April 1st announced, ““We’ve long been a second home for our guests’ dogs and cats and bicycles, letting them staying right in the guestrooms, so why not their horses? Many of our guests travel to the horse shows and we want them to get the very best out of their equi-experience opined Mandy Farmer, Accent Inns’ President/CEO.”

Quite a number of people called the hotel chain to inquire more about this service and got the answer neigh it’s just an April Fools joke! 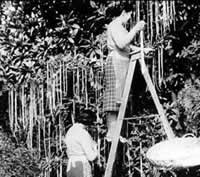 My favourite two hoaxes of all time both come from Britain. The first was foisted on the public by a serious BBC (British Broadcasting Corporation) news show called Panorama. Its host was a much respected broadcaster called Richard Dimbleby. The show aired in 1957 and took people to the Swiss-Italian border to watch the spaghetti harvest – peasants were seen picking strands of the pasta off trees. It was explained the bumper crop was due to the mildest spring on record and a lack of spaghetti weevils that year. Back in the 50s people were fooled, even the director of the BBC admitted to checking reference books for information about the origins of spaghetti. You can watch the segment for yourself at https://youtu.be/tVo_wkxH9dU.

My second favourite was one that actually fooled me at the time. I used to enjoy a television program called The Sky at Night hosted by slightly eccentric astronomer Patrick Moore (he used to wear a monocle!). Although slightly wacky he was a very well respected astronomer and he hosted the show for a staggering 55-years! On the morning of April 1st 1976 he appeared on a BBC radio show and explained to the audience, very authoritatively, the Jovian-Plutonian Gravitational Effect. He said the rare alignment of Pluto and Jupiter, where Pluto orbited behind Jupiter, was for a short period going to reduce Earth’s gravity. He said that if we were to jump in the air at precisely 9:47am that morning we would experience a slight floating experience. I of course did this as did millions of others. The kicker was that the BBC got many calls reporting that people did in fact experience a feeling of weightlessness, or could at least jump higher.

Here are several more April Fools hoaxes, can you guess which one wasn’t a hoax?

If you answered number three you’d be correct. A limited edition of 1,000 bottles of this scent was available to Japanese burger lovers at a cost of $42 – it came with a free Whopper. It was however only available on April Fool’s Day.

Will you spot this year’s April Fools joke from Accent Inns and Hotel Zed? Or will you be booking a room for your horse?