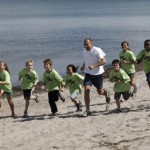 Glenn Harkness training with the kids

On Top of the World for Kids

Did you know that 34% of youth in Canada get fewer than two hours of exercise per week? That is one reason why our children are on course to be amongst the least healthy in Canada’s history. At the Boys & Girls Clubs they are doing their best to counter this trend.  Four times a week children at the Harbourside Boys & Girls Club put on their running shoes and hit the roads. They are taking up the challenge to complete a marathon in just over ten weeks and raise funds for out of school programs that promote active living.

The challenge was laid down by Glenn Harkness, Executive Director of Boys & Girls Clubs of Hamilton, who will be running the world’s coolest marathon at the North Pole to raise awareness of this serious epidemic facing Canada’s youth. On April 7, 2011, Glenn will cover 42 gruelling kilometres at sub-zero temperatures in one of the most remote places in the world. The kids from Harbourside-Esquimalt Boys & Girls Club will be with him every step of the way!

Raising awareness about child obesity isn’t Glenn’s only motivation for this crazy endeavour. He also wants to inspire kids growing up in what he calls tough situations to do things they don’t think they can. He told us, “The kids are an inspiration to me. I want to show them you can overcome any barrier. If you believe in yourself, you can accomplish anything.”

To echo that message, we’re inviting a series of guests to inspire the kids to maintain focused on their goal. Guests from the fire and police departments, the national rugby team, and two principals of local schools have all joined the run so far. Even local hero and Olympic silver medalist Simon Whitfield will be making an appearance!

Glenn himself will visit the Victoria club on March 8th to talk about his training for the North Pole Marathon and offer encouragement to our runners (Accent Inns has kindly offered to put him up). Then, on April 7th we’ll hold a special event at the club to celebrate the completion of the marathon and cheer on Glenn in his race over 5,000 km away. 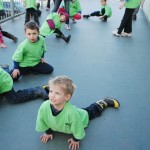 Children preparing to run with Glenn

Glenn’s campaign ‘On Top of the World for Kids’ reflects the true spirit of what Boys & Girls Clubs stand for – healthy kids and healthy communities – and we are proud to add this event to the list of ways in which we encourage kids in Victoria to be physically active and involved in their community. All the runners are collecting pledges as they complete the challenge so businesses wishing to show their support for what they are doing can offer to match funds, doubling the impact of the kids’ achievements. Every penny raised will fund after school programs in the Greater Victoria area.

Glenn’s challenge gives the kids a chance to show their community that they are rock star runners and to participate in something bigger than themselves: a movement to get Victoria’s kids healthy and active again. Our children have the remarkable responsibility of creating a better future, not just for themselves, but for our entire community. We support them as they put on running shoes and take steps to be on the top of the world with Glenn!